. Aboriginal artist, storyteller and educator, Rick Roser has traversed Australia and the globe with his work. Rick Roser is a descedant of the Picambul people of Southern Queensland.

From prolific performances at some of Australia’s premier folk festivals, to extensive independent touring workshops throughout Queensland schools and travelling the world as an Indigenous Culture Presenter, Rick’s diverse and colourful career has spanned more than 30 years. . His artwork has been exhibited both locally and internationally. 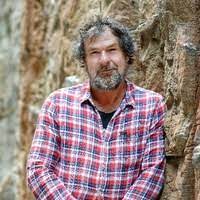